The railway strikers have been at it again, this time adding bringing back massive steam whistles to their list of demands. The strikers, who have been on the picket line for weeks, say that the whistles are a vital part of railway safety.”We can’t have trains zooming around without proper warning,” said one striker. “It’s just not safe.”The strikers have been met with some resistance from railway management, who say that the whistles are a relic of the past and that modern trains are much quieter.”We’re not going to bring back those noisy things,” said one railway official. “They’re just not necessary anymore.”But the strikers are adamant that the whistles be brought back, and say they won’t back down until their demands are met.”We’re not going to let the railway get away with putting profits before safety,” said one striker. “We’ll keep fighting until we get what we want.” 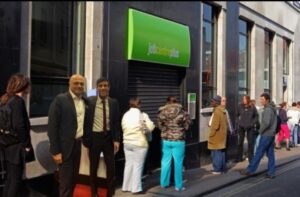